It’s #OCDweek! All week, we’ll be featuring daily posts from our guest bloggers about issues surrounding OCD. Today’s post is from Alison Dotson about the use of the term OCD on social media. Join the conversation in the comments below, or on Twitter using the hashtag #OCDweek.

A few months ago an interesting article showed up in my Facebook newsfeed: “Paperchase withdraws hand cleaner product called OCD after mental health charity brands it ‘crass and insensitive.’”

A mental health organization did in fact tell Paperchase, a stationery and office supply store in the United Kingdom, that the product they were selling was offensive because it mocks a very serious and debilitating disorder. But so did plenty of regular people with OCD. They took to Twitter to let Paperchase and other stores know how they felt about this product.

One of them was a young woman named Emily Davis. When Emily was suffering with OCD she washed her hands raw, and she tweeted the following:

People were offended by her being offended. One person called her a politically correct fascist. People told her she couldn’t take a joke and that she was being too sensitive.

Is it any wonder we sometimes hesitate to speak up and help spread awareness? I can’t tell you how many times I’ve been searching Twitter for interesting information to share and I run across tweets like this:

And I don’t say anything. I admit it: As outspoken as I can be on some issues, OCD makes me feel vulnerable. As strong as I can be about it, I don’t like being attacked for standing up for something so important and so personal.

One less direct and confrontational way to respond to these messages is with tweets like this:

Turn the term on its head. Use it to let people know that while they may not mean to cause harm or offense, what they’re saying is hurtful. We can use the #OCDproblems hashtag to talk about real OCD problems and fill the Twitter feed with valuable information.

A few months ago, BuzzFeed, which is notorious for using “OCD” in the wrong context, posted a sponsored article about cars. It was titled “15 Ways You’re OCD About Your Car.” Oh, boy. My OCD Twin Cities partner Jackie Lea Sommers noticed the faux pas and wrote a perfectly appropriate and polite response in the comments section, pointing out that OCD is actually a serious disorder and that the term shouldn’t be used as an adjective like that. She gave them the benefit of the doubt and acknowledged that they may not have known how far off they were when they chose the title but that they probably didn’t want to risk alienating potential customers with it.

Right away another commenter pounced on her, saying “Calm down, lady.” I couldn’t let that go. I intervened, saying Jackie was right and that “OCD” was not the correct term, explaining that the “D” stands for disorder and that disorder is actually really serious. Well, that didn’t help. And honest to goodness, I was polite. Another commenter altogether responded to me, calling me the “B” word and further chastising Jackie for her comment.

This is the type of thing that keeps me from pushing back in comments sections. And maybe I’m going about it all wrong. There was a time, not that long ago, that if a reader disagreed with something printed in the newspaper, he or she wrote a letter to the editor, and that letter might have been deemed good enough and appropriate enough to be printed. Maybe it’s better to go straight to the source, every time, and not give the comments section a second glance. I should start writing letters to manufacturers and marketing departments, not sharing my opinion for other readers.

But guess what? Jackie and I weren’t the only people who pointed out how wrong and offensive the title was, and someone at BuzzFeed did change it. They changed “OCD” to “obsessive,” which was a great start. (They also deleted every comment that had anything to do with the original wording.)

I think BuzzFeed is finally catching on. Just a couple weeks ago they posted an article entitled “45 Photos That Will Annoy You More Than They Should,” a list of pictures like this one: 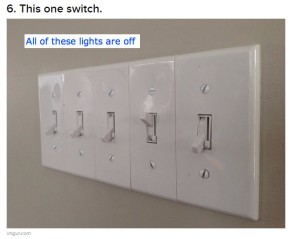 Not long ago they would have given this a title like “45 Photos That Will Make You So OCD,” I just know it. I really do believe people consistently speaking up has made a difference.

What do you think? Do you ever comment when you see offensive product names or article titles? Have you ever written a letter to someone who could make a difference?

Today is the first day of OCD Awareness Week, an opportunity for all of us to help dispel myths about OCD. Consider tweeting or sharing your experiences about your OCD — the more we can talk about it, the more we can help people understand the reality. And maybe eventually they’ll stop trivializing our experiences. Use the hashtag #OCDweek and join the conversation.